What's the meaning of the phrase 'Pulling one's leg'?

To pull someone's leg is deceive them in a humorous or playful way.

What's the origin of the phrase 'Pulling one's leg'? 'You're pulling my leg' was a common slang expression in the 20th century, but is rather going out of fashion these days.

It would be nice to be able to say that I've discovered the origin of 'pulling your leg', which is one of the holy grails of etymology. Regretfully, not. Nevertheless, I get asked about the phrase often and it's worth investigating, so here goes.

To 'have your leg pulled' means to be misled or teased in a mild and benign way. It is natural, or at least seems to be natural, as almost everyone that claims to know the origin of the phrase does it, to locate its source in a situation where an actual leg is pulled. But, like those other 'leg' phrases 'an arm and a leg', 'shake a leg' and 'break a leg', there's no evidence to show that the limb in question when the phrase was coined was anything other than imaginary.

The two most commonly repeated of the literal 'leg pulling' theories are:

1. Thieves used to pull at people's legs to trip them and then use the quarry's disorientation as an opportunity to rob them. This was supposed to have taken place in 'Victorian London', 'medieval markets' or anywhere else that the storyteller chooses to site the story. The lack of consistency counts against this being correct - were it a genuine explanation there wouldn't be a need to vary the location in the retelling. Needless to say, as is always the case with this form of theory, the sort that the younger amongst us might describe as 'random', there's no evidence to support it.

2. Until 1783 Tyburn was the principal place of execution in England. Many notables were hanged there, including Oliver Cromwell, although he was blissfully unconcerned about it as he had spent the previous three years buried in Westminster Abbey and had to be exhumed in order to attend. The 'pulling my leg' theory is that people, the so called 'hangers on', were hired at Tyburn executions to hang onto the victim's legs in order to give them a quick end. The practice of 'hanging-on' might or might not have happened, but the idea that it is the source of 'pulling one's leg' is implausible and is generally discounted as folk-etymology. Firstly, it bears no relation to the expression's meaning. Secondly, as we shall see, the expression wasn't known during the centuries when public 'suspension' hangings (as compared to 'long drop' hangings, which wouldn't have required hangers-on) took place. It would seem odd for the phrase to have originated at hangings, many of which were of celebrities and reported in minute detail, but not to have been recorded in print at that time.

As to the actual origin of 'pulling my leg', I don't really know, but I can provide an approximate date and location. Surprisingly to some, who might think it sounds British, the phrase is American. It was coined in the 19th century and the first time it is found in print is in The diary of James Gallatin, secretary to Albert Gallatin, a great peace maker, 1813-1827, recording an incident that was said to have taken place in 1821:

Mr. Adams is not a man of great force or intelligence, but his own opinion of himself is immense. I really think father, in a covert way, pulls his leg. I know he thinks little of his talents and less of his manners.

The diary was published in 1914 from notes Gallatin claimed to have been given to him by his grandfather. It is now generally accepted to be a fake and the contents invented by Gallatin. The use of the expression 'pulls his leg', which isn't found anywhere else in print for many years, hardly adds to the diary's claim of authenticity.

The real date of origin is more like 1880 and the earliest example that I've found of it in print is from the Ohio newspaper The Newark Daily Advocate, February, 1883:

It is now the correct thing to say that a man who has been telling you preposterous lies has been "pulling your leg."

The fact that the phrase needed to be explained to the paper's readers is clear evidence that it was a neologism (as far as Newark, Ohio was concerned at least) in 1883, so if that example isn't the earliest use it must be close to it. 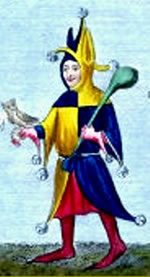 What is unequivocally British is the extended version 'pull the other one, it's got bells on'. That of course means 'don't try and fool me with that crazy story, I'm not that stupid'. It has been in use in Britain since at least the 1960s, which is when the first appearances in print are found. The 'bells' are probably a reference to a jester's costume.

So, we don't know who coined 'pulling your leg', but I hope this has gone some way to clarifying who didn't.

What's that? You know the origin of 'the real McCoy', 'posh' and 'the whole nine yards'...