What's the meaning of the phrase 'Shake a leg'?

Shake a leg is used in several ways, but always to indicate movement - to move, to dance or to hurry up.

What's the origin of the phrase 'Shake a leg'?

The phrase is sometimes used to mean 'get going' or 'hurry up'. It was explicitly defined that way in the New York Magazine in 1904:

The more recent UK phrase 'get a legger on' is another way of saying the same thing.

Before that though shake a leg had another meaning, which was 'to dance'. There are several citations from various US and UK sources from the mid 19th century that relate to dancing; for example, the Dubuque Democratic Herald, October 1863, in an advertisement for a local ball:

"Nearly every man in town able to shake a leg has purchased a ticket." 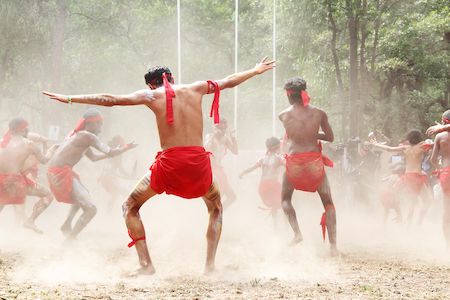 In the Australian Aboriginal culture there is a dance called 'Shake a leg', which certainly lives up to its name.

There are various 'Shake a...' phrases which relate to dancing. In the 18th and 19th century 'shake your heels', shake a foot', 'shake a toe' and 'shake your bones' were all used. These have mostly disappeared now, with 'shake a leg' the only early one that has lasted the course. In recent times 'shake your booty', 'shake, rattle and roll' or just 'shake it' have become common.

'Shake a leg' is sometimes confused with 'show a leg'. These two phrases aren't related and derived independently of each other.