What's the meaning of the phrase 'Fed up'?

To have had more than enough of something or someone, or to be bored with or tired of the same.

What's the origin of the phrase 'Fed up'?

'Fed up' conveys a feeling of being listless and somewhat annoyed, rather like the later English RAF/Army slang expressions 'browned off', 'brassed off' and 'cheesed off'. It has a different origin from those obscure military expressions, as it has a literal meaning, which is 'satiated with food'.

Sadly, we often forget the wisdom of the old English proverb 'enough is as good as a feast' and, having already eaten our fill, eat just that little bit more. The unpleasant feeling that comes from eating more than is good for us is what is meant by 'fed up'.

The expression dates from the early 19th century, when the languid aristocracy were compared to farm animals that were force fed to make them plump for market. This piece, from the English newspaper The Middlesex Courier, February 1832, recounts a court case in which it was argued that the Duke of Bourbon couldn't have hanged himself, being unable either to stand on a chair or tie a knot. The lawyer referred to 'the awkwardness of Princes', saying:

Every thing being done for them, they never learn to do anything; they are fed up, as it were, in a stall to exist and not to act. It is rare to find a Prince who can walk decently across a room.

Later in the century, other groups who were considered to be idlers were also described as 'fed up'. An example of that is given in this piece from The Anglo-Brazilian Times, 1873:

For eight months the Brazilian Government has been supporting immigrants from England, when, instead of being fed up in idleness, they really ought to have been prosecuted for representing themselves as agricultural labourers in place of the vagabonds they proved themselves to be.

The phrase began creeping into general parlance in the late 19th century and was sometimes emphasized graphically in the extended forms 'fed up to the eyeballs', 'fed up to the back teeth' etc. An early figurative use of the phrase, where no reference is made to overfeeding, appeared in The Westmoreland Gazette, November 1900:

It may be quite true that, to use an expression often heard in South Africa just now, the men are 'fed up' with the war. 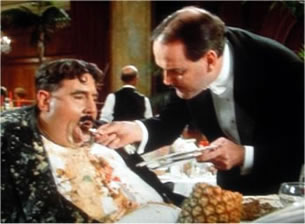 In our own time, the best example of being 'fed up' is in the black comedy Monty Python's The Meaning of Life, 1983, in which the bad-tempered and satiated Monsieur Creosote, played by Terry Jones, is induced to eat just 'one more wafer-thin mint', before exploding.