Get off your high horse

What's the meaning of the phrase 'Get off your high horse'?

A request to someone to stop behaving in a haughty and self-righteous manner.

What's the origin of the phrase 'Get off your high horse'?

'High' has long been a synonym for 'powerful'; 'remote from the common people'. This usage isn't limited to being on one's 'high horse' but has also persisted in terms like 'high and mighty', 'high-handed' and 'high finance' and in job titles like 'high commissioner'.

When we now say that people are on their high horse we are implying a criticism of their haughtiness. The first riders of high horses didn't see it that way; they were very ready to assume a proud and commanding position, indeed that was the very reason they had mounted the said horse in the first place. The first references to high horses were literal ones; 'high' horses were large or, as they were often known in medieval England, 'great' horses. John Wyclif wrote of them in English Works, circa 1380:

Ye emperour... made hym & his cardenals ride in reed on hye ors. 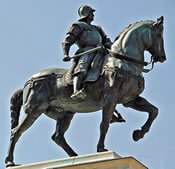 medieval soldiers and political leaders bolstered their claims to supremacy by appearing in public in the full regalia of power and mounted on large and expensive horses and, in sculptural form at least, presented themselves as larger than life.

The combination of the imagery of being high off the ground when mounted on a great war charger, looking down one's nose at the common herd, and also being a holder of high office made it intuitive for the term 'on one's high horse' to come to mean 'superior and untouchable'.

By the 18th century, the use of such visual aids was diminishing and the expression 'mounting one's high horse' migrated from a literal to a figurative usage. In 1782, Admiral Sir Thomas Pasley recorded his Private Sea Journals. These have ultimately failed to live up to their name as, in 1931, they were published by his great, great great grandson:

"Whether Sir George will mount his high Horse or be over-civil to Admiral Pigot seems even to be a doubt with himself".

Deference to people in positions of power has diminished over the years and we tend nowadays to mock high and mighty people as being 'on their high horse' when they affect a superior and disdainful manner - the term is now rarely used for people who actually are powerful and remote.