What's the meaning of the phrase 'Spend a penny'?

To use a public lavatory.

What's the origin of the phrase 'Spend a penny'?

This refers to the (former) use of coin operated locks on public toilets. It was used mostly in the UK and mostly by women (men's urinals were free of charge). 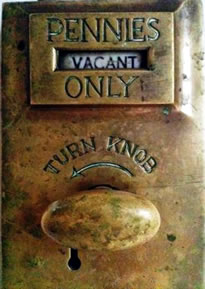 Such locks were first introduced, at a public toilet outside the Royal Exchange, London, in the 1850s. The term itself is later though. The first recorded citation of it is in H. Lewis's Strange Story, 1945:

'Spend a penny' has now gone out of use, partly because charges have changed and partly because it was always a coy euphemism, which now seems rather dated. The writing was on the wall for this phrase, so to speak, from 1977, when the Daily Telegraph printed an article headed "2p to spend a penny".