What's the meaning of the phrase 'Murphy's Law'?

The so-called law is usually expressed as 'If anything can go wrong, it will'.

What's the origin of the phrase 'Murphy's Law'? 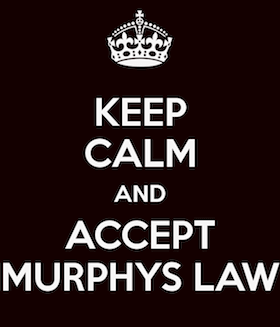 Murphy's Law parallels two other common terms for what is essentially the same pessimistic idea - Sod's Law and Finagle's Law. Of these three, Murphy's Law is by far the more commonly used. The notion that 'if anything can go wrong, it will' is the simplest version of a notion that has been expressed in numerous ways. Many of these pre-date 'Murphy':

The list of names for the supposed phenomenon is also arbitrarily long and, as well as the above 'laws', includes: The Fourth Law of Thermodynamics; Newton's Fourth Law of Motion; The Inverse Midas Touch, etc, etc.

In the use of Murphy, Sod and Finagle and also the less common Reilly's Law, the coiners of these names seem to have settled on a theme which calls on perceived negative allusions to the Irish. There is, in fact, nothing to link any of those names to anyone Irish, but they certainly sound as though there could be.

In reality, Murphy is commonly thought to be Captain Edward A. Murphy, an American aerospace engineer, who performed studies on deceleration for the U.S. Air Force in 1949. During the experiments, in which he had a less than cordial relationship with other members of the research team, he noted that if things could be done wrongly, they would be. In subsequent interviews, various team members have stated that they referred to the notion as 'Murphy's Law'. The expression wasn't put into print by them at the time though and the earliest citation of it is in Anne Roe's book The Making of a Scientist, 1952:

"There were a number of particularly delightful incidents. There is, for example, the physicist who introduced me to one of my favorite 'laws,' which he described as 'Murphy's law or the fourth law of thermodynamics' (actually there were only three last I heard) which states: 'If anything can go wrong it will.'"

Other sources have questioned that the Murphy in the name was an actual person. In his memoire Into Orbit, 1962, John Glenn states that:

"We blamed human errors like this on what aviation engineers call 'Murphy's Law'. 'Murphy' was a fictitious character who appeared in a series of educational cartoons put out by the U.S. Navy... Murphy was a careless, all-thumbs mechanic who was prone to make such mistakes as installing a propeller backwards."

The case for Edward A. Murphy being the source is fairly strong, but perhaps not quite 'beyond all reasonable doubt'.

Sod and Finagle certainly weren't real people. Sod's Law isn't known until later and the first example of it that I can find is from The New Statesman, October 1970:

"Sod's Law... is the force in nature which causes it to rain mostly at weekends, which makes you get flu when you are on holiday, and which makes the phone ring just as you've got into the bath."

This is a stronger variant of Murphy's Law, using the expletive 'sod' for accentuation. The term is, of course, short for 'sodomite', although the word had weakened into a general non-sexual term of abuse by 1970 - along the same lines of 'bugger'.

Finagle's Law follows a similar pattern. Finagle has been used in the USA, as a verb meaning 'to obtain a result by trickery; to deceive; to wangle'. A finagler is recorded in the American Dialect Society's Dialect Notes, 1922 as:

"One who stalls until someone else pays the check"

Soon afterwards (1926), Harold Wentworth listed it in the American Dialect Dictionary as 'US political cant.

The term probably had its origin in England. The English Dialect Dictionary lists the words fainaigue and feneague - meaning 'to cheat'.

The first example I have of 'Finagle's Law' in print dates from The Indiana Gazette, April 1979, although there are assertions that it dates from the 1940s. There's some evidence to show that Finagle's Law, while no doubt having been influenced by Murphy's Law, is not merely the same notion under another name. Finagle's Law is more often applied specifically as a spoof version of the Second Law of Thermodynamics and is stated as 'The perversity of the Universe tends towards a maximum'. This pseudo-science background also applies to 'Finagle's Constant' - a mythical mathematical constant which is added to one side of an equation to obtain a result when the facts don't match the theory.