What's the meaning of the phrase 'Motley crew'?

An assorted and ill-disciplined group of ne'er do wells.

What's the origin of the phrase 'Motley crew'?

Since at least the 14th century, 'motley' (with a variety of spellings) has been the name of a type of cloth made from two or more colours and, in later years, the name of clothing made from such cloth. There are several citings of motley in the late 14th century, including this from the Prologue of Chaucer's The Canterbury Tales: 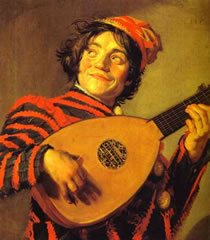 The best-known wearers of motley were jesters of harlequins and the patchwork costume became their standard style of stage dress, as in this painting by Frans Hals, circa 1620.

From the 17th century onward, any miscellaneous ragbag of undisciplined ne'er-do-wells might find themselves described as a 'motley crowd', 'motley herd', 'motley assembly' etc. Added to this list, but with no especial significance came 'motley crew'. It may be that this was in reference to the crews of sailing ships, with the 'motley' being used to distinguish between an assortment of types, as distinct from a crew of disciplined and uniformed sailors. The earliest citation that I have found of 'motley crew' in print certainly refers to sailors. That's in George Anson's Voyage Round the World, 1748:

This ship they resolved, if possible, to carry to Europe... but their great difficulty was to procure a sufficient number of hands to navigate her. They endeavoured to supply this defect by pressing many of the inhabitants of Buenos Ayres, and putting on board besides all the English prisoners then in their custody, together with a number of Portuguese smugglers whom they had taken at different times, and some of the Indians of the country. With this motley crew (all of them except the European Spaniards extremely averse to the voyage) Pizarro set sail from Monte Video.

With the associations of a 'motley crew' with indiscipline and garish costume, what better name for a heavy rock band? Mötley Crüe formed in 1981 and adopted the name. In the fashion of the time, like contemporaries Siouxsie & the Banshees and Enuff Z'nuff, they indulged in a deliberate misspelling. That fashion has passed now, but it's unlikely that their bass player Nikki Sixx will revert to his given name of Frank Carlton Serafino Feranna, Jr.

See also: On with the motley.