More bang for your buck

What's the meaning of the phrase 'More bang for your buck'?

More for your money.

What's the origin of the phrase 'More bang for your buck'?

Generals and political leaders have argued over the costs of the military since Adam was a lad. Their conversations have probably not changed much:

Dwight D. Eisenhower faced something of a dilemma in 1953. He was a military man to his socks and was inclined to augment defence in the face of the perceived 'reds under the bed' threat, but he was also a Republican US president and as such politically wedded to cutting state spending. His solution was simple - increase the armed forces but decrease their budget. In ordinary circumstances that circle would be difficult to square. The solution that the US Joint Chiefs of Staff came up with, which they titled the 'New Look', was a policy of using nuclear weapons in any conflict bigger than what they called 'a brush-fire war'. That allowed them to radically reduce the numbers of servicemen and replace them with the comparatively inexpensive atomic bombs. 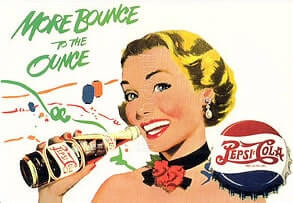 All of the above was described in a story in The Winona Republican Herald on 21st December 1953. The story also reports Admiral Arthur Radford as describing the policy as the 'more bang for your buck' theory. This was reputed to be an adaptation of Pepsi-Cola's 'More Bounce to the Ounce' slogan, which was introduced in 1950.

Most sources credit US Defense Secretary Charles Wilson as the source of the expression 'more bang for your buck'. These invariably point to him having used the phrase in 1953. However, Wilson wasn't the person who coined the phrase, although its increased use in a military context during the time of the Eisenhower administration did bring the expression to wider use.

The first citation of the phrase in print that I can find is an advert in Metals and Plastics Publications, 1940. No advertiser would use a colloquial expression in an advert unless it was understandable to his audience, so I expect there are earlier citations yet to be found.

Just in passing, I ought to mention that a theory that this phrase originated as a reference to prostitution is suggested by some. There's no truth whatever in that notion.