What's the meaning of the phrase 'Fairy-tale ending'?

A perfect, joyful and simplistic ending to a story, like those often found in fairy tales.

What's the origin of the phrase 'Fairy-tale ending'?

Before we look at the origin of the phrase 'fairy-tale ending' let's just say something about its spelling. Like many compound words that began as two words, a 'fairy tale' has become conjoined with a hyphen to become a 'fairy-tale'. Some pairs of words, for example 'birth place' and 'blood stained' have gone the full distance to become 'birthplace' and 'bloodstained', but 'fairy-tale' isn't quite there yet. Having said that, you might find the expression spelled as 'fairy tale, 'fairy-tale' or 'fairytale' and you aren't likely to be corrected whichever you use. Nevertheless, the proper way to spell the expression we are looking at here is 'fairy-tale ending'.

The first metaphorical uses of 'fairy tale' and 'fairy story', that is, uses that don't relate to actual stories about fairies, are found in texts from the 17th century. For example, this piece from the English clergyman John Swan in Speculum Mundi, 1635:

And as for the Fayrie tales of the Lamiæ, they nothing belong to this creature: neither be those common reports of Sphinx his riddle, any other then fables.

It took another two centuries before 'fairy-tale ending' began to be used. Here's an early example in print from February 1854, in Household Words, the weekly magazine produced by Charles Dickens. This links 'fairy-tale ending' to the typical formula for such - 'they lived happily ever after':

I should not have been sorry to have had the old fairy-tale ending affixed to this true story, ‘And they lived together very happily for ever after’. 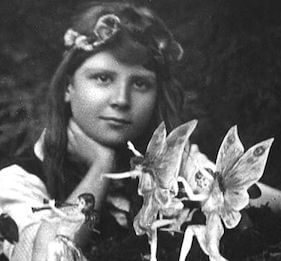 As an adjunct to 'fairy-tale ending' we have a story which, when it was debunked the 1980s, was widely reported in newspapers as 'the end of a fairy-tale'.

The Cottingley Fairies are a series of photographs taken from 1917 onwards by two young girls, Elsie Wright and Frances Griffiths, which appear two show the girls playing with fairies. These days people know how easy it is to doctor images and such pictures would be immediately dismissed as fakes. In the early 20th century however the public was a little more gullible (and perhaps a little more inclined to believe in fairies) and many people accepted the pictures as genuine. No less a personage than the writer and celebrated believer in spiritualism Sir Arthur Conan Doyle pronounced the pictures to be authentic.

As old ladies in the 1980s Wright and Griffiths admitted to have faked the photographs using cardboard cut-outs, although rather bizarrely, Frances Griffiths continued to maintain that one of the five pictures was genuine.