What's the meaning of the phrase 'Doom and gloom'?

A feeling of pessimism and despondency, often with regard to business or political prospects.

What's the origin of the phrase 'Doom and gloom'?

The phrase 'doom and gloom', which is also seen in its variant for 'gloom and doom', sounds as though it might be quite old - Shakespeare or the Bible perhaps? Strange to say, but it isn't remotely old enough to be either. Shakespeare did take the word 'gloom' and coin the adjective 'gloomy', but he didn't associate 'doom' with either of them. Neither of the words 'doom' or 'gloom' appear, singly, let alone together, in the King James Version of the Bible.

The phrase began to be used in US newspapers in the late 19th century - for example, this piece from the North Carloina paper The Statesville Landmark, May 1875:

"Slowly, and with a tone of doom and gloom, the ponderous clock began striking."

The expression's use was initially limited largely to the fields of finance and politics and wasn't commonplace in the wider language until it was popularised via the 1947 stage show Finian's Rainbow. Harburg and Saidy's musical was a great popular success and was turned into a film in 1968. The character Og, a pessimistic leprechaun, repeatedly used the rhyming phrase thus: 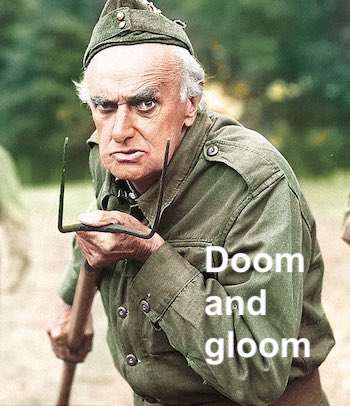 The BBC had a hand in spreading the use of the the word 'doom' and hence 'doom and gloom' in the UK. In 1970 they broadcast an influential science fiction television series called Doomwatch, which highlighted various potential doom-laden threats to civilisation. Between 1968 and 1977 (and seemingly forever since via interminable repeats) they also broadcast the popular comedy Dad's Army, in which the lugubrious Private Frazier, played by the Scottish character actor John Laurie, would shout out "We're doomed, I tell ye!" in virtually every episode.