A club sandwich is a sandwich of bread, sometimes toasted, and several other ingredients, often chicken or turkey, bacon, lettuce, tomato, and mayonnaise. The sandwiches are usually cut into halves or quarters to form small triangles.

What's the origin of the phrase 'Club sandwich'? 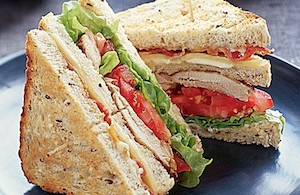 The primary reason for an entry about a sandwich on an etymology website is that the source of its name is one of the folk-etymologies that float around the Internet.

In May 2018 Peter Kay and Sian Gibson filmed an unscripted episode of their popular comedy Car Share for the BBC. Gibson's character Kayleigh asked the question:

"What's the U for in a club sandwich? The C L B are chicken, lettuce and bacon, so what's the U?"

Following that, numerous people (seemingly unaware that Car Share is a comedy) began posting online answers suggesting that 'club' is an acronym for 'chicken and lettuce under bacon'.

Let's just knock that on the head right away. The 'club' in club sandwich is not an acronym for 'chicken and lettuce under bacon' or for anything else.

Club sandwiches are so called because they were first made in a club. Most attempts to explain the derivation of words as acronyms are what are known as backronyms, which are purported derivations for existing words made by dreaming up a convenient collection of words which seem to be plausible as the source of the acronym. The best known of these are the false acronyms for 'posh' and 'golf' - supposedly 'port out, starboard home' and 'gentlemen only, ladies forbidden' respectively.

In the case of 'club-sandwiches' the case for them being named as an acronym is non-existent. There are no acronyms older than the 1930s, in fact the word acronym itself wasn't even coined until 1943, and club-sandwiches date from roundabout the 1890s/1900s.

Okay, so if the source of club-sandwich is a club, which club is that? There is a widely repeated view that the name originated in men's dining and social clubs in New York and most commonly mentioned is the Saratoga Club in Saratoga, New York. That club does itself claim to be the originator of the sandwich.

A better case can be made for another New York club however, as it comes complete with some documentary evidence. A piece in the New York newspaper The Evening World, on 18th November 1889, included this:

Have you tried the Union Club sandwich yet? Two toasted slices of Graham bread, with a layer of turkey or chicken and ham between them, served warm.

That has the first letter of club as a capital, which indicates the usage as being 'a sandwich of the Union Club' rather than a 'club sandwich'. Various other citations in US newspapers in the late 1800s refer to club sandwiches, all with a capital C indicating that they were referencing a named club.

The first example that I know of 'club sandwich' in print as a generic name for the sandwich is in Ray L. McCardell's Conversations of a Chorus Girl, 1903:

All we need is a club sandwich and a bottle of beer.

The above book was printed in New York in 1903, so that adds some circumstantial evidence to the origin being New York.

So, although the ingredients and the precise source of the club sandwich will continue to be argued about, there's one thing we can say for sure - it's not an acronym.