What's the meaning of the phrase 'Country bumpkin'?

An awkward, unsophisticated rustic; a clown

What's the origin of the phrase 'Country bumpkin'?

The speakers of English have a rich vocabulary to denote stupidity - 'inane', 'foolish', laughable', 'ridiculous', 'absurd', 'dumb'... the list goes on and on. There is another side to the coin - 'clever', 'intellectual', 'sharp', 'ingenious' etc. That is, unless you live in the countryside. There are many words to indicate the dim-wittedness of rustics but few to suggest their intelligence.

Can you be a bumpkin anywhere else?

To put it bluntly, as far as city slickers are concerned, the countryside is where the thickos live. Those horny-handed sons of the soil are variously called 'bumpkins', 'yokels', 'hicks' and 'hillbillies', and as you might imagine, these names didn't come out of the air, each has a derivation. A 'bumpkin' was originally the name that the English had for the Dutch, whom they portrayed as small, comic and tubby. The word is derived from either the Dutch 'boomken', meaning ‘little tree’ or 'bommekijn', meaning ‘little barrel’. The word came into English in the 16th century. Unsurprisingly, as the English at the time couldn't even spell English words with any consistency, there wasn't a consensus on how it should be spelled. The first example in print, by the lexicographer Peter Levens in his 1570 rhyming dictionary, is 'bunkin'. The next attempt, by Lord Windsor in 1658, went like this:

May I not looke more lyke a bumking than the rest.

(and were the good Baron Windsor living today he might want to have another go at that).

'Bumpkin' was the accepted spelling by the 18th century, by which time the term just meant 'stupid fellow'. Bumpkins were downgraded to 'country bumpkins' by Lord Chesterfield in 1774 when he made this observation:

A country bumpkin is ashamed when he comes into good company.

Not that we really needed to import slang terms for rustics from Holland, we had our own 'yokels'. The word yokel was derived as a name for an ignorant rustic from the old dialect name for a green woodpecker. An early example of it in print is found in the Morning Post, May 1820:

The great pugilistic match between Oliver and Painter, for 100 guineas, takes place on Monday. A purse of 25 guineas will also be given to Teasdale and a yokel of his own weight.

Meanwhile, across the pond, hicks were emerging from the undergrowth. Actually, although 'hick' is now a bona fide American term, it travelled there from the UK. It came about via the habit of changing the first letters of names in order to make a diminutive nickname. Robert became Bob, William became Bill and Richard became Dick or Hick. The British publication A New Dictionary of the Terms Ancient and Modern of the Canting Crew, 1699, defines 'Hick' thusly:

In 1702 Richard Steele was good enough to bring that naming method and 'bumpkin' together, in the comic play Funeral:

A rustic appellation that is certainly of US origin is 'hayseed'. It was coined by that most American of authors Herman Melville, in Moby-Dick, 1851, in a sequence where he suggests that a "country-bred... downright bumpkin" would fare badly in a storm at sea:

Ah, poor Hay-Seed! how bitterly will burst those straps in the first howling gale.

The formula 'rural resident' + 'shortened nickname' was also used to derive the US term 'hillbilly'. There's not more to be said about this name than the definition that the New York Journal printed in April 1900:

A Hill-Billie is a free and untrammelled white citizen of Alabama, who lives in the hills, has no means to speak of, dresses as he can, talks as he pleases, drinks whiskey when he gets it, and fires off his revolver as the fancy takes him. 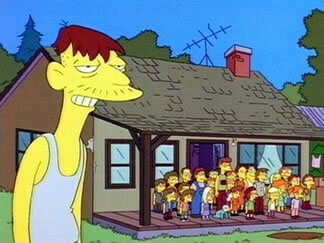 So, the UK prefers 'bumpkins' and 'yokels', while the US goes for 'hicks', 'hayseeds' and 'hillbillies'. In 1994, when the writers of the Simpsons needed a resident moronic character for the cartoon series, they went straight to the countryside. Not a hick, hayseed or hillbilly though; they opted for Cleetus Spuckler, the Slack-Jawed Yokel.