What's the meaning of the phrase 'Come a cropper'?

Fall over or fail at some venture.

What's the origin of the phrase 'Come a cropper'?

The word crop derives from the Old Norse word kropp, which was the name of a hump or swelling on the body. The OED graphically describes a crop as a 'swollen protuberance or excrescence'. This later modified into meaning any swollen or rounded item, for example, a bird's gullet, the seed head of a ripe plant (the source of the word crop as applied to cereals etc.) or, spelled as croup, the rear end of a horse - also called the crupper. 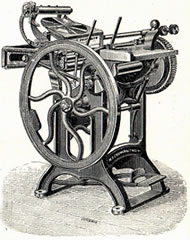 'Come a cropper' is one from the list of British phrases that is associated in the popular imagination with Victorian inventors. These include the various phrases based on the name of Thomas Crapper, the sanitary engineer and 'bats in the belfry', reportedly coined after George Bateson. Henry Smith Cropper is the man supposedly the source of 'come a cropper'. Unlike Bateson, who turns out to be an invented inventor, Cropper, like Crapper, did actually exist. Indeed he was a prominent enough citizen to become Sheriff of Nottingham. He didn't occupy his time in chasing outlaws around the local forests though. H. S. Cropper and Co. began selling the Minerva platen printing press in 1866. It was a successful design and before long all platen presses were known as croppers. It is suggested that 'come a cropper' derives from the accidents that print workers had when catching their fingers between the plates of the presses.

Like the Bateson story, this is an appealing tale. There's no truth to it though - it's just another invention.

For the actual derivation we need to consider the nether quarters of a horse - the croup or crupper. In the 18th century, anyone who took a headlong fall from a horse was said to have fallen 'neck and crop'; for example, this extract from the English poet Edward Nairne's Poems, 1791:

A man on horseback, drunk with gin and flip,
Bawling out - Yoix - and cracking of his whip,
...
The startish beast took fright, and flop
The mad-brain'd rider tumbled, neck and crop!

'Neck and crop' and 'head over heels' probably both derive from the 16th century term 'neck and heels', which had the same meaning. 'Come a cropper' is just a colloquial way of describing a 'neck and crop' fall. The phrase is first cited in Robert S. Surtees' Ask Mamma, 1858:

[He] "rode at an impracticable fence, and got a cropper for his pains."

By the time John C. Hotten published his A Dictionary of Modern Slang, Cant and Vulgar Words in 1859, the phrase has come to refer to any failure rather than just the specific failure to stay on a horse: