Batten down the hatches

What's the meaning of the phrase 'Batten down the hatches'?

What's the origin of the phrase 'Batten down the hatches'? In his recent (September 2012) song Tempest, which recounts the story of the Titanic's sinking, Bob Dylan uses the lines:

This has caused a couple of correspondents to write to me asking what 'batten down' means. Many people may know what 'batten down the hatches' means, but some clearly don't, so here goes...

'Hatch' is one of those words with dozens of meanings in the dictionary. In this case we are looking at the 'opening in the deck of a ship' meaning. Ships' hatches, more formally called hatchways, were commonplace on sailing ships and were normally either open or covered with a wooden grating to allow for ventilation of the lower decks. When bad weather was imminent, the hatches were covered with tarpaulin and the covering was edged with wooden strips, known as battens, to prevent it from blowing off. Not surprisingly, sailors called this 'battening down'.

The above was explained, probably better than I just have, in the definitive record of history of nautical language, Admiral W H Smyth’s 1867 encyclopaedia The Sailor's Word-Book: an alphabetical digest of nautical terms. He calls it 'battening of the hatches' but it is clearly the same expression:

“Battens of the hatches: Long narrow laths serving by the help of nailing to confine the edges of the tarpaulins, and keep them close down to the sides of the hatchways in bad weather.” 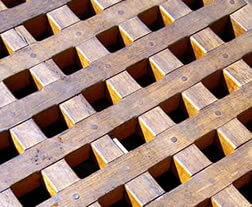 The earliest reference to this practice that I know of is in William Falconer's An Universal Dictionary of the Marine, 1769:

The battens serve to confine the edges of the tarpaulins close down to the sides of the hatches.

The first citation of the explicit use of the phrase 'batten down the hatches' is from the 1883 Chambers Journal:

"Batten down the hatches - quick, men."