What's the meaning of the phrase 'The bee's knees'?

If something is said to be the bee's knees it is excellent - the highest quality.

The phrase, like 'the cat's pajamas', has given its name to a cocktail, made from gin and honey with lemon and orange juice.

What's the origin of the phrase 'The bee's knees'? - the short version

The phrase 'the bee's knees' was originally an 18th century fanciful phrase which referred to something that didn't exist. It was used as the kind of spoof item apprentices would be sent to the stores to fetch - like tartan paint or a left-handed hammer. This meaning is no longer used.

In the Roaring Twenties in America, bright young things invented nonsense language to refer to things that were 'the tops' - like 'the cat's pajamas', 'the snake's hips' and so on. They utilized the existing 'bee's knees' phrase to add to that list.

What's the origin of the phrase 'The bee's knees'? - the full story It's difficult to know if we need an etymologist or an entomologist for this one.

I suppose the first question ask of either would be "Do bees have knees?". Well, yes they do. Not exactly like your knees though. Bees have six leg sections and each is connected by a joint. These joints aren't usually named but what better name than knee? The joint between the femur and tibia is the most 'knee-like'.

Nor is there any connection with another earlier phrase, 'a bee's knee'. In the 18th century this was used as a synonym for smallness, but has since disappeared from the language:

'The bee's knees' is one of the phrases that people seem determined to make sense of. But how much sense is there to find?

'Bee's knees' began to be used in early 20th century America. Initially, it was just a nonsense expression that denoted something that didn't have any meaningful existence - the kind of thing that a naive apprentice would be sent to the stores to ask for, like a 'sky-hook' or 'striped paint'. There are comic American newspaper stories from the period where guests at a meal spent the evening sewing buttons on ice-cream and eating bee's knees.

That 'non-existent' meaning is apparent in a spoof report in the New Zealand newspaper The West Coast Times in August 1906, which listed the cargo carried by the SS Zealandia as 'a quantity of post holes, 3 bags of treacle and 7 cases of bees' knees'.

The teasing wasn't restricted to the southern hemisphere. The US author Zane Grey's 1909 story, The Shortstop, has a city slicker teasing a yokel by questioning him about make-believe farm products:

"How's yer ham trees? Wal, dog-gone me! Why, over in Indianer our ham trees is sproutin' powerful. An' how about the bee's knees? Got any bee's knees this Spring?"

This odd cartoon from the May 5th 1914 edition of the Fort Wayne Sentinel uses the term in exactly the same way: 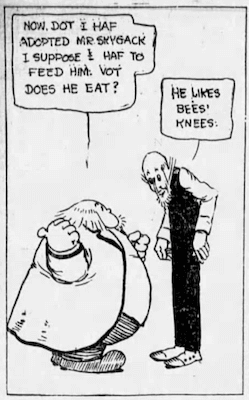 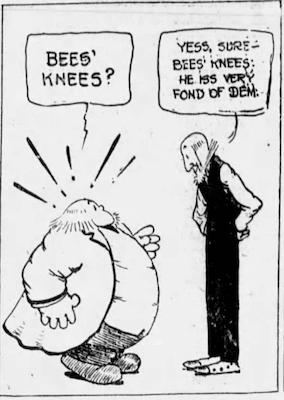 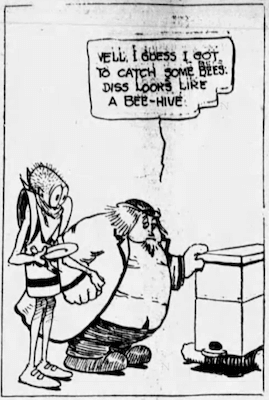 [Text: Now dot I haf adopted Mr Skygack I suppose I haf to feed him. Vot does he eat? He likes bees' knees. Bees' knees? Yes, sure, he is very fond of them. Vell, I guess I got to catch some bees. Diss looks like a bee-hive.]

There's no profound reason to relate bees and knees other than the jaunty-sounding rhyme of 'bees' and 'knees'. In the 1920s it was fashionable to use nonsense terms to denote excellence - 'the snake's hips', 'the kipper's knickers', 'the cat's pyjamas/whiskers', 'the monkey's eyebrows' and so on. Of these, the bee's knees and the cat's whiskers are the only ones to have stood the test of time.

The nonsense expression 'the bee's knees' was taken up by the socialites of Roaring 20s America and added to the list of 'excellent' phrases.

The first use of the expression in print with the "excellent" meaning that I can find is from the US newspaper The Buffalo Times, February 1922. It was in a spoof account of the marriage of Princess Mary in London:

"I seen a princess once and it only cost a dime. Her name was Princess Fatima and I'll say she was the bee's knees when it come to dancing'."

Several U.S. newspapers did feature lists of phrases under 'Flapper Dictionary' headings. Although 'bee's knees' isn't featured, they do show the time as being a period of quirky linguistic coinage; for example, from one such Flapper Dictionary: 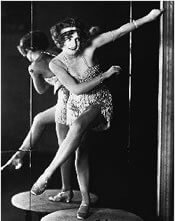 One tenuous connection between the bee's knees and an actual bee relates to Bee Jackson. Ms. Jackson was a dancer in 1920s New York and popularised the Charleston, being credited by some as introducing the dance to Broadway in 1924. She went on to become the World Champion Charleston dancer and was quite celebrated at the time.

It's not beyond the bounds of possibility that the expression became popular in reference to her and her very active knees, but 1924 post dates the origin of the phrase.